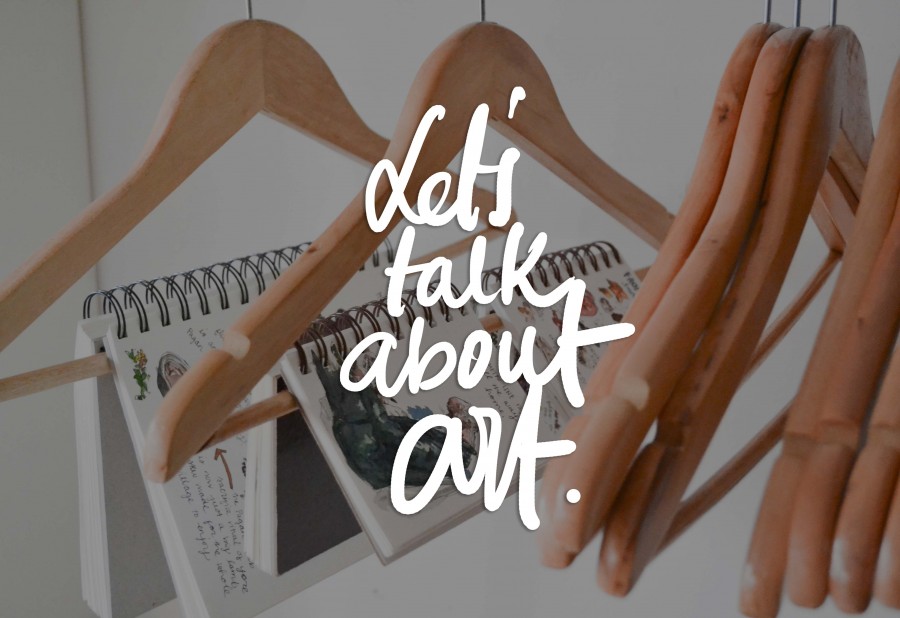 I’m 25 years old and living in Serbia. Some days I really wish I could live somewhere else, in some other country, in some other apartment. I think I simply get tired of everything; waiting in line, complicated bureaucracy, constant money struggle, and trash-culture society… But those things happen on bad days. On good days, I meet people like Emma Fick, American illustrator who is currently living and working in Serbia. You’ve probably heard about Emma and her project Snippets of Serbia through media or social networks, given the fact that her book of Serbian-life-inspired illustrations recently got published. I know that Serbian-life-inspired illustrations can easily sound like something filed under Horor and placed beside Stephen King in a local book store, but Emma’s work is most def filed under AWESOME. Vivid illustrations describe raw everyday life situations in Serbia in a completely different way. Green market, kajmak and chvarci and public transport scenes are just a tiny part of Emma’s creative universe. The illustrations are completed with a touch of witty humor through handwritten captions and descriptions that WILL bring a smile on your face (I guarantee!).

I got in touch with Emma earlier this year, but, as it usualy goes, we haven’t had a chance to meet in person until earlier last week when we met in a new coffee place in Vračar – cafe Kozmetičar and did la petit interview. I ordered a tall cappucino, prepared my notebook and comfortably tucked myself in an armchair. Now we’re talking! 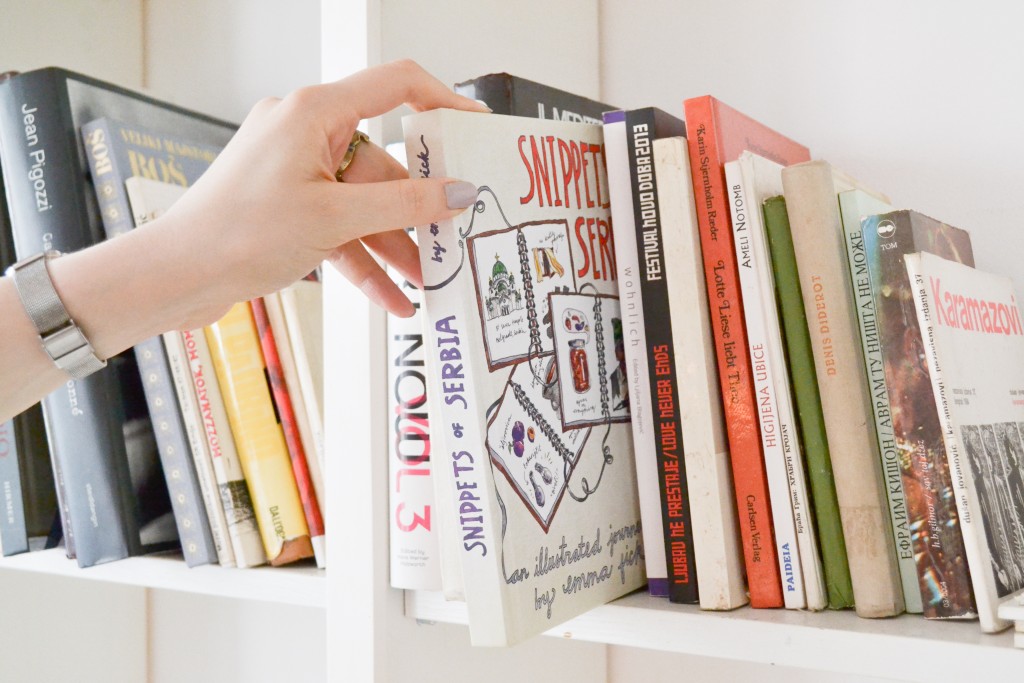 Tell us something about yourself, where do you come from, things you love, things you hate…?

My name is Emma, and I’m from Covington, Louisiana in the US.  I love 85% dark chocolate, travel, and woven textiles. I hate airport food, waking up late, and Jeff Koons’ work.

How did you end up working in Serbia?

I first came to Serbia to teach English on a Fulbright scholarship. It opened the door to Serbian/Balkan culture, and I was so fascinated that I started illustrating as a means to understand it, and then I somehow found myself sucked in and invested—and here I am!

And you’ve been an illustrator for how long now?

I made the decision to be an illustrator instead of pursuing a career in academics (English literature) around June 2014.  I think of myself as actually being an illustrator since October 2014—since then, I’ve made my living exclusively with art. 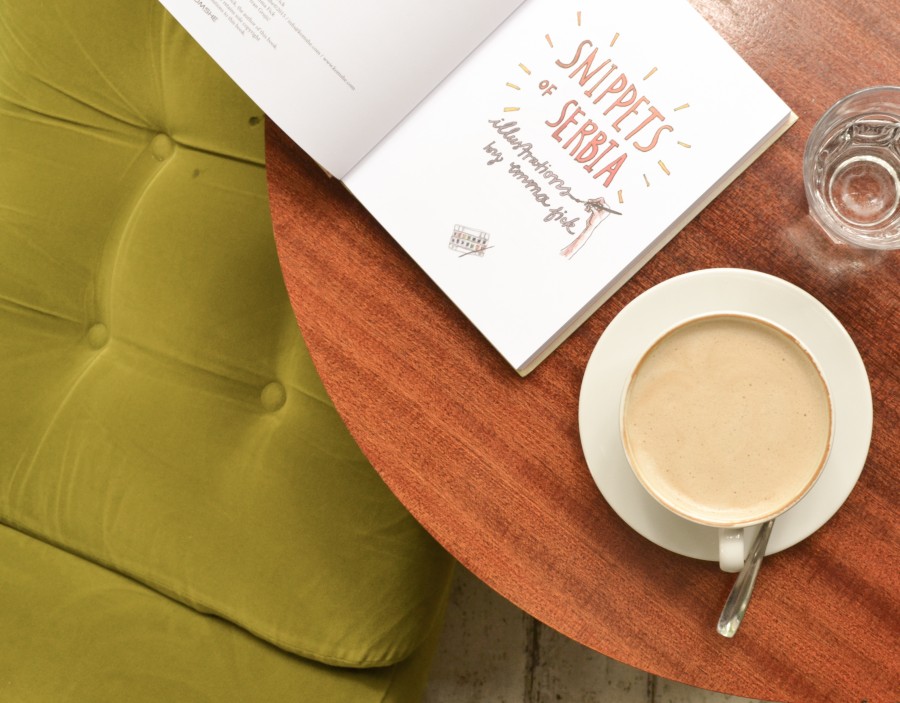 How do you pick the things/social phenomenons you want to illustrate?

It comes completely organically! Things strike me at the strangest moments. Sometimes I’ll be walking to the grocery store, frustrated by something or other and thinking about my to-do list for the day, when bam! – I’ll pass a person or a phenomenon that kind of jolts me awake, makes me take sharp notice, and I know in that moment that that is what I’ll draw. It’s exciting when an idea hits me like lightning, but of course there are also the less exciting moments where over time I come to understand a pattern and then slowly come up with an illustration idea.

In your oppinion, what’s the most appealing thing about Serbia?

I’d say the way it is both incredibly open (the famous hospitality to foreigners) and somehow closed. It’s not an “easy” place to travel to.  It’s not “easy” to access. You have to have someone to show you the way, but once you have that person, you find an exquisite and largely untouched world waiting for you!

And are there any deal-breakers?

Well, the economic situation right now makes life nearly impossible for most people in Serbia. And without a functioning economy, all the beauty in the world can’t give people comfortable and stress-free lives. It’s important to take those things as two side of the same Serbian coin: on the one hand, a purity and generosity of resources, on the other hand, economic difficulty and shrewdness in daily life.  They’re hard to reconcile. 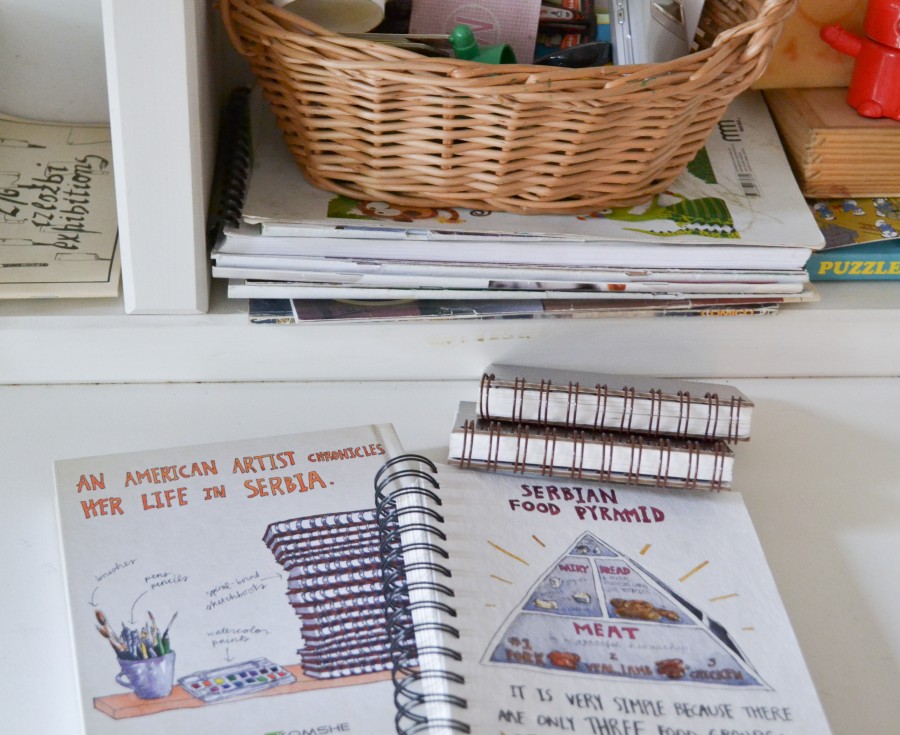 What’s the most ineresting thing you’ve experienced in Serbia so far?

I love all the tiny, ancient churches scattered about, especially in the South. They’re fascinating and beautiful and appeal to me as an art historian, as an illustrator, as a storyteller, and as a nature-lover!

Do you have some fav coffee or restaurant places in Serbia/Belgrade?

Well, near my neighborhood I like Bre Café and Od Usta Do Usta. The best falafel is at Hummus Market on Beogradska street. Kafanas are too various to name. But I’m always asking friends to pick the café or restaurant, and that way I’m always discovering new things!

How do you like serbian food? What are your favorites?

Ohhh goodness, I can’t get enough! I love sarma and peppers stuffed with beans; sopska salad in the summer and kiseli kupus in the winter; ribla corba in the Danube is a must. I love the river fish—like pastrumka. They make it perfectly here! And ajvar is, of course, a must.

Can you name a few of the Artists or artworks that you feel had the most influence on you and your work?

I love Botticelli, Modigliani, Frida Kahlo, and Saul Steinberg. I like artists who play with form, make people a little too long, or a little unnaturally situated on the page. I also like artists who create a lexicon of symbols in their work. 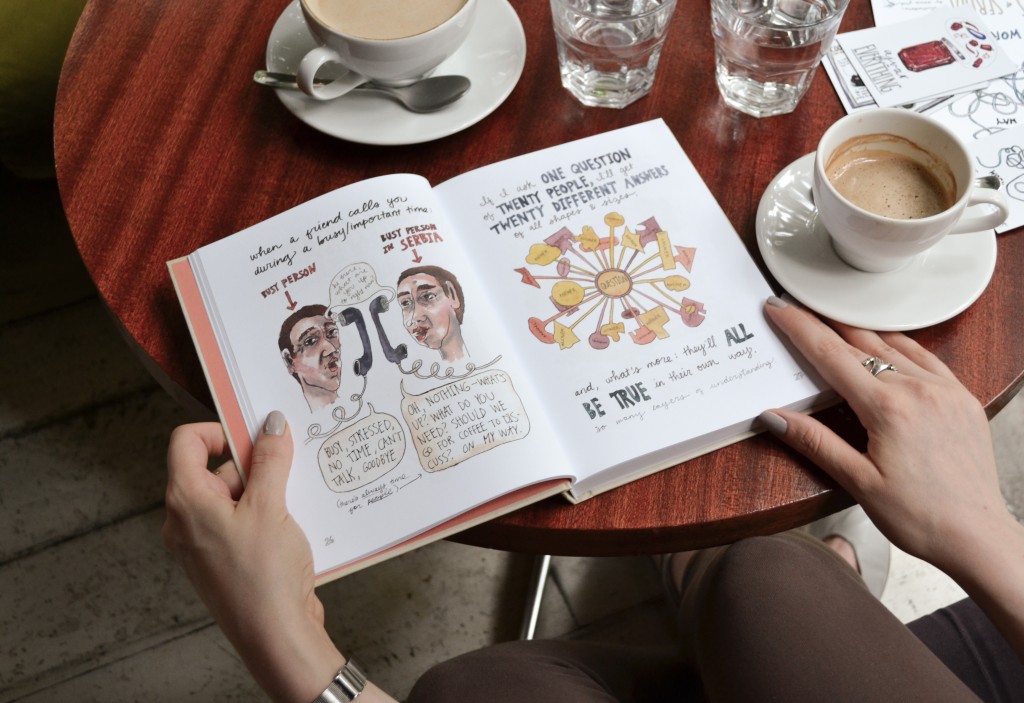 What are the sources of your everyday inspiration?

Public transport, markets. There are also certain music albums I play on repeat. It puts me in a certain meditative phase, which is where some of the more symbolically abstract or fantastical works are born (not Snippets, but the non-narrative pieces).

First, home to Louisiana to see my family and do “Snippets of New Orleans.” Then, I want to travel around the world and make travel illustrations in as many countries as I can manage. I want to be a travel illustrator. 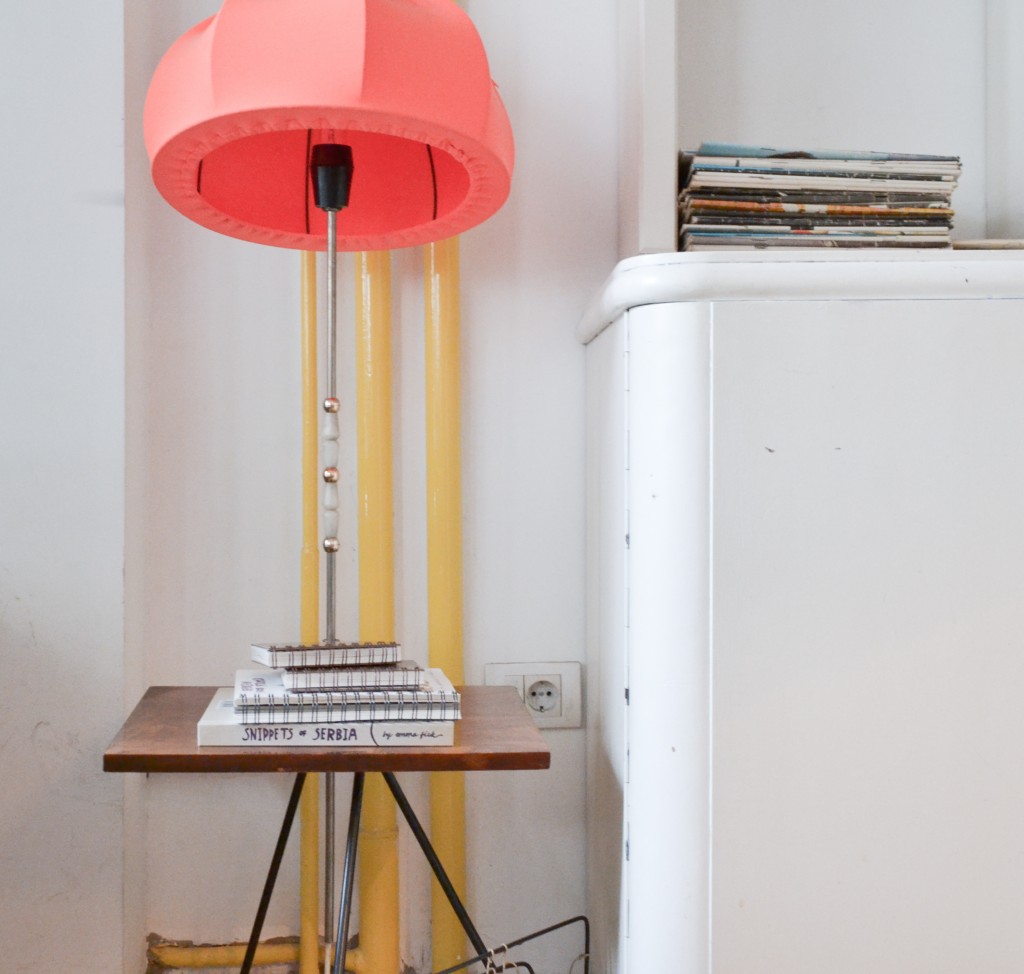 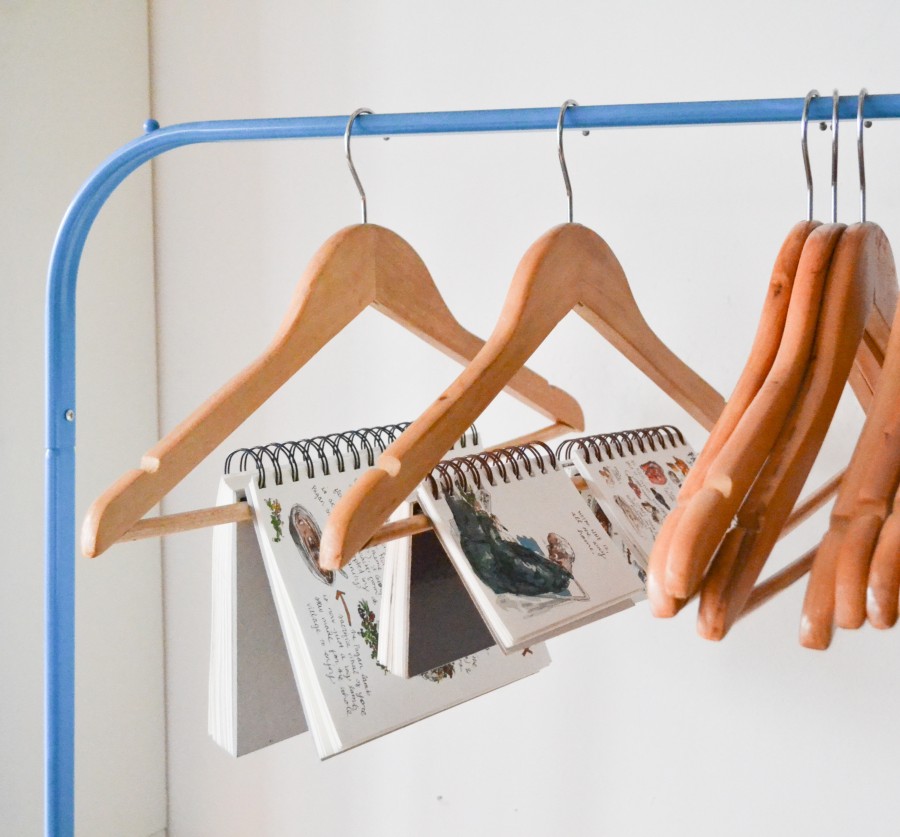 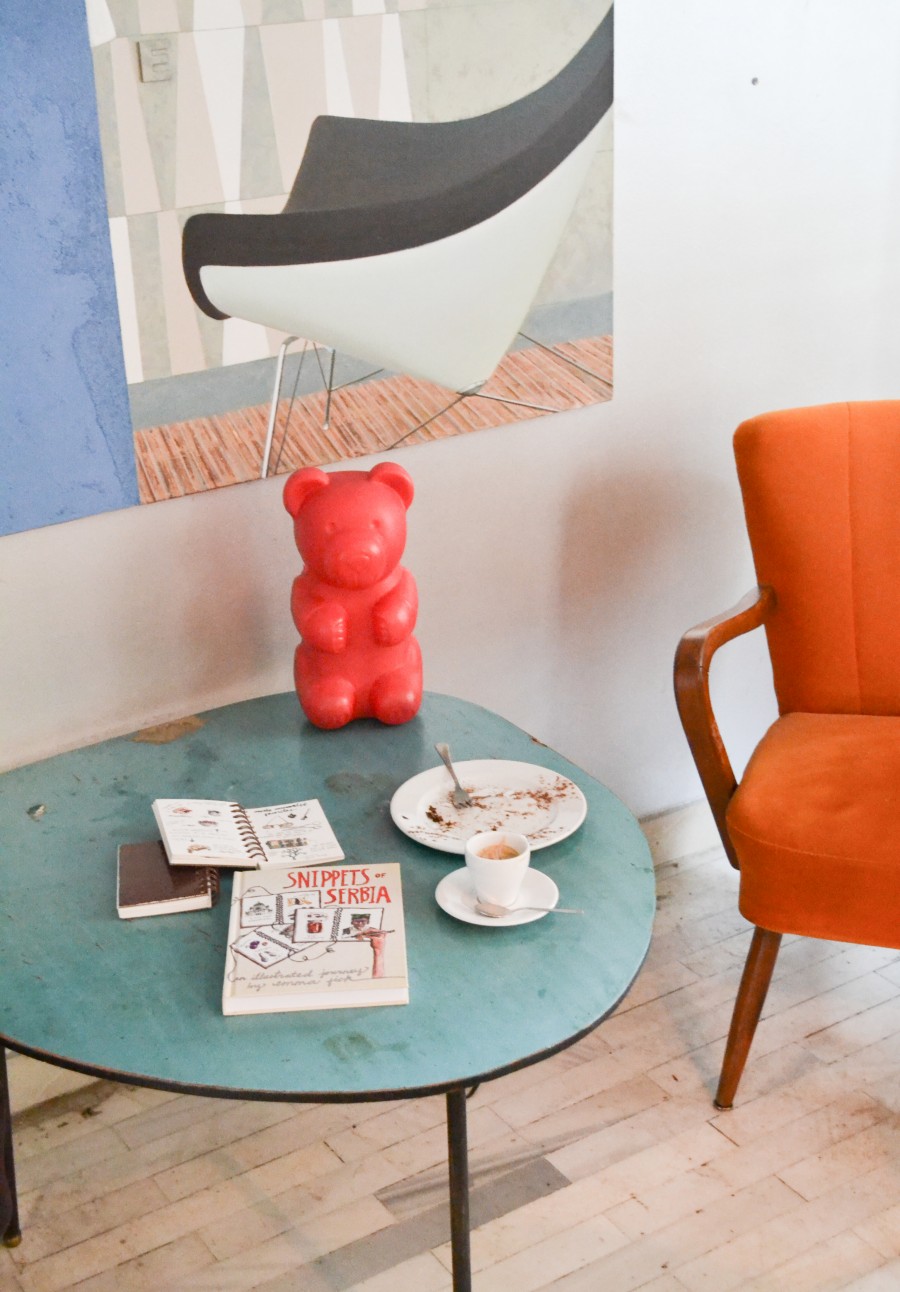 At the end, waiting in lines, complicated birocracy and trash-culture are not at all what Serbia’s all about, and people who made it their home away from home are the ones to be trusted on this.